A girly girl into baseball, baking and karaoke!

Hashtag motto: #PadresWithMyPadre (drives to Phoenix, AZ. each year with her dad to attend spring training for her favorite team).

Born in San Diego, California, military brat Jessica Rowley had lived in many parts of the country by the time she lost all of her baby teeth. The former Comparative Religion major found her way to ATOMIC by divine intervention. In ATOMIC’s early days, Jessica’s college pastor ran a swing night then referred her to ATOMIC for a job opening. Starting at the front desk in what was the Placentia location in 2011, Jessica worked at the Irvine location as well. She was promoted to Assistant Manger in 2015. And this past July, became Marketing Manager for both the Irvine and Fullerton studios.

Once a theater major, Jessica didn’t seriously get into dance until July 2011, when she began taking private lessons in swing from owner Shesha. After about a year of privates with Shesha and a few other instructors, she decided to give West Coast Swing a try. She found it was better suited to her personality. She adds, “I enjoyed the fact that they played music that I listen to in my car, and that I could wear jeans and Tom’s to dance rather than the vintage lindy styles many others wear for swing.” While describing some of her other favorite things about West Coast Swing dance, Jessica continued, that it brings out her sassy, sultry side, the person she wants to be. She also finds it easier on her knees and lungs. “#AsthmaProblems,” she playfully gestured!
This lifelong theater junkie is most passionate about singing. She has participated in choirs since the third grade, and began taking voice lessons in sixth grade. She went on to join worship teams and perform in voice recitals during college. She admits that she gets anxiety during performances, but not while singing karaoke (a favorite past time). As a self-proclaimed “shy-outgoing person”, Jessica only recently began performing on theater stages in productions like Godspell and Shrek. While her dream role is to play Sara in Guys and Dolls, she humbly confesses that she’s not sure if her voice is quite ready for such a role. So this go-getter who stresses the importance of preparation, continues to train her instrument with regular voice lessons. Much like with dance, she believes that private lessons are a good investment for oneself. Despite admitting to having stage fright, Jessica has managed to work on nine shows in just the last two years; Tackling her fears head on! 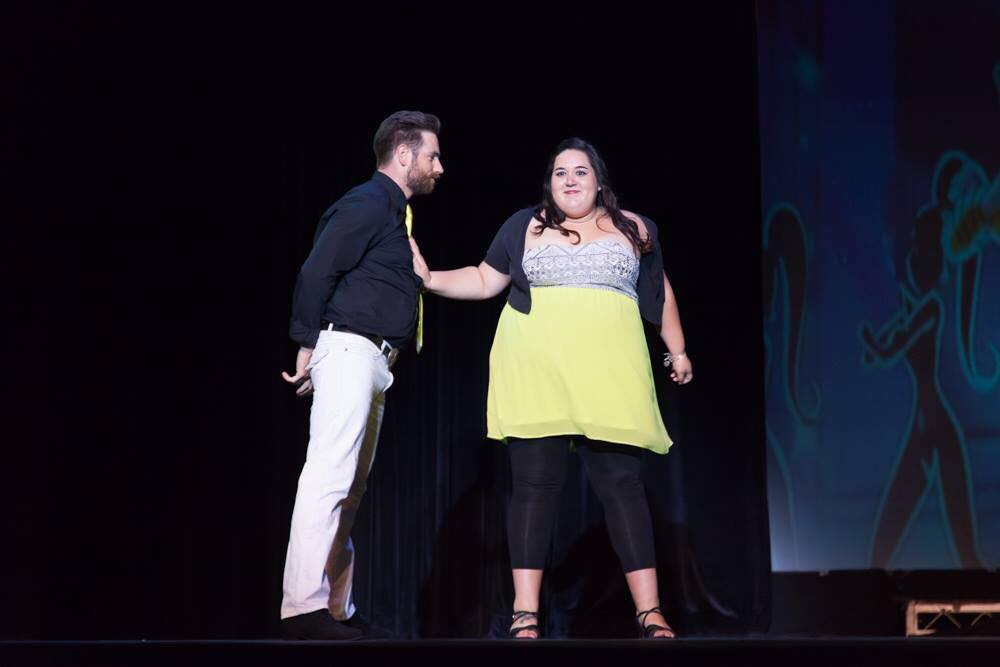 Jessica commands the stage during her Atomic Showcase performance.
While she enjoys expressing herself in song and on theater stages, she also loves working behind the scenes as a stage manager. She dreams of starting a theater business that offers acting classes and voice lessons, along with a dance social type atmosphere. Apart from college, there’s not much theater education out there for adults. So Jessica wants to provide a place where adults can learn without hefty tuitions, while also filling the void of providing hard to come buy rehearsal space.
As former Assitant Manager, Jessica wants patrons to know that “There’s a rhyme and reason for everything done here, from who teaches what, to how payments are processed.” She would like for patrons to continue leaving their feedback in the comment boxes, however wishes that more people would leave their contact information so that they can be reached when the class or instructor they requested is added to the schedule.
Known for her attention to detail and great memory, Jessica is excited about her new Marketing and Sales Manger position. She will continue to manage the social media pages and e-mail communications, as well as facilitate various ways of generating business, as ATOMIC expands with its new Fullerton location.
Fun facts: