Breaking the Law… by Dancing

With so many people reveling in the freedoms that America is known the world over for, particularly around Independence Day, would you believe that there are actually laws on the books against something as seemingly harmless as dance? Believe it or not, this is not something that only takes place in far off lands, rather right here in the United States!

Although dance is a popular activity and integral part of culture and expression in hundreds of countries across the globe, in some places it is not only taboo, it is against the law. What could be the harm in dance you might wonder, that could stir up such controversy as to impose such restrictive laws?

For those of us who grew up in places where there was never a dance hall or studio too far away, or where an occasional flash mob or dance circle at a social event wasn’t something so out of the ordinary, trying to imagine a place where dance is illegal is probably like trying to imagine a place where ice cream is outlawed – it may exist, but no one wants to think about it! As hard to fathom as it may be, there are in fact places that prohibit dance in public spaces for a variety of reasons. …And you might be surprised to discover that some of these places aren’t necessarily too far from home.

Iran
In Iran all non-traditional forms of dancing are banned. However non-traditional dances namely Hip-Hop, have become increasingly popular with youths. Most young people have found ways around the laws by joining dance groups labeled as fitness classes, or meeting in parks and other places where they can go unnoticed and get away with it. Most locals assert that there was a great deal of culture to offer and that places with dancing were frequented by young people prior to the revolution in 1979, which outlawed (so called signs of Westernization such as) non-sanctioned dance, music and alcohol.

Scandinavia
It comes as a surprise to many that some Scandinavian countries have dance bans as well. The tremendous irony is that dance is actually a compulsory part of physical education class, required for students in order to pass and graduate! As a result, there have been on going debates and court cases over the distinction of what exactly dance is and how it can be compulsory curriculum in schools, only to be-later restricted as adults. The rationale behind it is said to be that dance, (particularly in parts of Sweden and Iceland), is thought to be a threat to public order and lead to safety issues such as disruption of traffic and fights. Police in favor of dance bans say without them there would be chaos and disorder.

It is important to note that it is not dance itself that is banned, rather dancing in places that don’t have a permit. In some cases a public dance permit is required from the police as well as the municipality. By law there is no such thing as spontaneous dance, so if it should occur then the owner of the space is required by law to stop it and remove the offenders, as to do otherwise is a criminal offense. This even applies to clubs and restaurants that play loud music and serve alcohol, which also must obtain a separate license just for dancing. 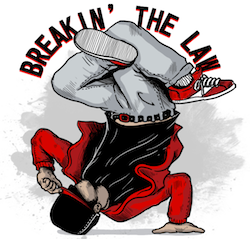 Japan
Japan is another place that imposes special license laws on establishments which have dancing. Most of these places only allow dancing until midnight and must be closed by 01:00 am. Although such laws have been around for decades, police raids on clubs in violation of the law increased following the death of a young club goer who was involved in a fight at a dance club. Many conservative citizens believe that public dancing incites drug use, violence and other “deviant”/troublesome behavior. On the other hand, there are people protesting the law and working towards relaxing them in preparation for the 2020 Olympic Games, as they realize the negative affect it could have on (attracting) tourist and their perceptions of the country.

USA
It is not only in far off countries where this is an issue. Right here in our own backyards (in the good old US of A), there have been a few cases of dance becoming a criminal act. Once home to the Golden Pine restaurant, the coal mining town of Pound, Virginia is now known for its 18 year dance ban imposed by local Christian fundamentalists who took control of the local government. Those in favor of the dance ban claimed that they oppose dance because it leads to failed marriages and sinful acts such as imitating sexual contact, premarital sex and cheating. While many openly admitted to these reasons being the catalyst for the ban, others tried to cover it with the excuse of being a noise and safety concern. The owner of the restaurant-bar was harassed and thwarted by local officials and church leaders from obtaining a dance license. He was repeatedly sighted for allowing people to dance in his bar, then forced to defend himself in court where the anti-dance ordinance was struck down in violation of First Amendment Rights; only to later be reinstated due to loopholes in the law.

The 18 year old ordinance denied dance permits to “anyone who is not a proper person, nor to a person who is not a person of good moral character.” Following years of court battles, the Golden Pine eventually closed its doors. A federal judge compared the case to the film Footloose which was said to be loosely based off of this story.

This is a good reminder of how certain things that are considered rights in some places are a privilege in others. The next time you are somewhere dancing, just imagine what you would do or how you would feel if you were threatened with legal action simply for moving to music? This can also a be a lesson no to take things for granted and to truly live out those famous words “dance as if nobody’s watching.”