With all of the dance crazes that have swept through pop culture over the years, it can be quite a task to remember them all. One era that arguably stood out from the rest was the 1970’s. A time period of major political and cultural shift helped to create a unique time of artistic expression and creativity unlike any other before it. With so many new music trends coming out, plenty of new dance trends soon followed. This helped create a demand for more dance on TV with the addition of shows like Soul Train, which went on to shape dance, music and pop culture well into the 21st Century. Dancing became even more important to this new generation of club goers as more discotheques began to spring up all over the place. Known for loud polyester clothing, platform shoes, and of course disco music, this era of free love and flower power helped fuel some of the wildest dance crazes ever. Regardless of ones birth year, people across many generations can easily identify specific fashions from the 70’s, but how about the dances? Let’s have a look as we flash back to the funky 1970’s!

1. The Hustle
In 1975, singer Van McCoy told everyone to “Do The Hustle!” in his popular song of the same name. The song and dance became so big that the name hustle became linked to most disco-style dances from that time. As a result, there were many different styles of hustle. West Coast vs. East Coast as well as partner and line dance variations. The couples version soared in popularity after being featured in the cult classic film Saturday Night Fever. This mix of Swing and Latin dance to a 70s disco beat is still performed today in ballrooms across the world.

2.The Bump
Like many other dance crazes, the Bump was a simple dance that didn’t require learning a lot of complicated steps. In fact, it only consisted of one main step! As pairs of dancer swayed to the music while standing side by side, they would come together to bump hips about every other beat of music. Even though the idea was to bump gently, smaller dancers would often be sent flying across the dance floor by heavier dancers who bumped too hard! The dance also inspired a few songs of the same name, but could be done to just about any song.

3.YMCA dance
Much like a nursery rhyme, this song is loved by children (and adults) everywhere, and has a simple, catchy hook that is hard to get out of your head.
The iconic 1978 song “YMCA” by The Village People, spawned the popular dance that is one of the few which does not require the use of ones feet. Participants need only move their arms to form the letters Y, M, C, A, whenever those letters are sung in the lyrics. People generally skip around and freestyle during other parts of the song. This dance is so catchy, simple and fun for all that is still commonly done today, primarily in the stands at sporting games, weddings and other social events.
https://www.youtube.com/watch?v=CS9OO0S5w2k&index=5&list=PL3FDDE4369CCABEF7

4.Funky Chicken Dance
One of the most colorful dances from this or any time, the Funky Chicken was a solo dance that basically imitated the jerky movements of a chicken walking around. It had steps like “chicken legs” and “chicken wings”, and differed from the Chicken Dance done at wedding receptions.

5.The Disco Finger
Another dance synonymous with the film Saturday Night Fever, this move required minimal movement below the knees. Most people just imitate John Travolta’s stance with hips thrusting from side to side as the right index finger rhythmically points from the floor moving back and forth across the body up to the sky. 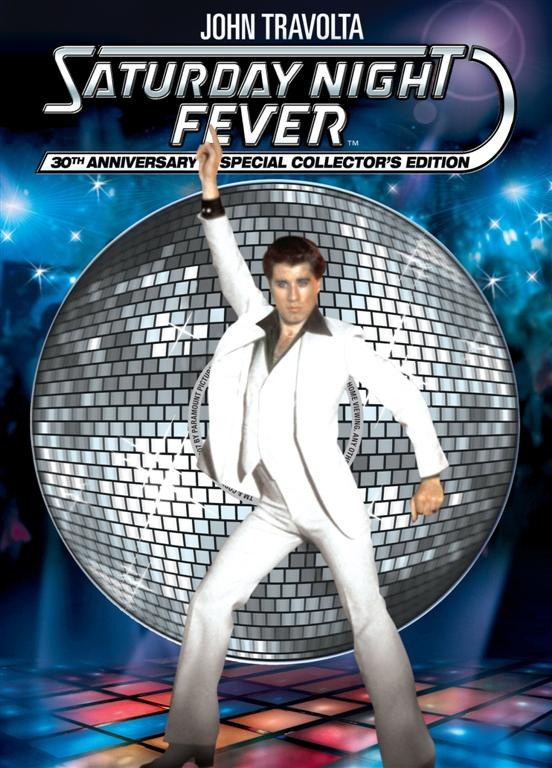 6. The Bus Stop
Not as simple for the rhythmically challenged, however still catchy and quintessential ’70s!

7.The Robot
Also sometimes called the Mannequin, this street dance often causes viewers to think they are seeing an optical illusion, as the some of the movements are subtle yet impactful, and tough to replicate. This is a dance style that typically takes years of practice to achieve much less master. Starting in the 70’s along side the growing break dancing scene, it skyrocketed to infamy as one of Michael Jackson’s signature moves, and is still a staple in the hip-hop and pop worlds.

8. The Lawnmower
A relatively simple yet silly dance that can be done by just about anyone. Ready for this? Just pull one arm back as if you’re starting a lawnmower, then grab the imaginary handle and with arms extended push the mower back and forth across an imaginary lawn. Tired yet?
https://www.youtube.com/watch?v=RL2bZYWO8p0

9. The Sprinkler
No fancy footwork needed for this dance. As the name implies, simply extend one arm out at your side, with the other arm bent while holding your hand up to your head. Then move your straight arm in a slow, staccato fashion as if it were a sprinkler watering a lawn.
https://www.youtube.com/watch?v=7qYR5gVsoY4

10.The Electric Slide
This four wall line dance was originally set to Marcia Griffiths’ song “Electric Boogie“. Created in 1976, it has gone on to become a staple at weddings, concerts and other social gatherings for decades. It’s repetitious pattern makes it easy to learn in a short time, and the fact that it can be danced to a variety of music genres allows it to fit well into a variety of music and dance styles.
https://www.youtube.com/watch?v=-mOY2eWO2qw

Although the 70’s have come and gone, the era will live on through its nostalgic music and carefree dance steps that will carry on for generations to come.