Easter and the Egg Dance

For most, Easter brings to mind Easter bunnies, sweet treats, Easter egg hunts, as well as religious traditions for some. One thing that most people don’t associate with Easter is music and dance.  So you might be surprised to learn that there is a centuries old Easter tradition of dancing with eggs!

The Egg dance began many Centuries ago as a Pagan celebration of spring that symbolized a rebirth of the earth. It was later adopted by early Christians as a symbol of the rebirth of a man during Easter. There are various types of egg-dance across different cultures, however it is written that the earliest known egg-dance dates back to the 5th Century, brought to England by German Saxons. In the UK the dancing, called the hopp-egg, stems from the Saxon word hoppe, meaning dance. The most common version seemed to be one dancer hopping around a single egg. 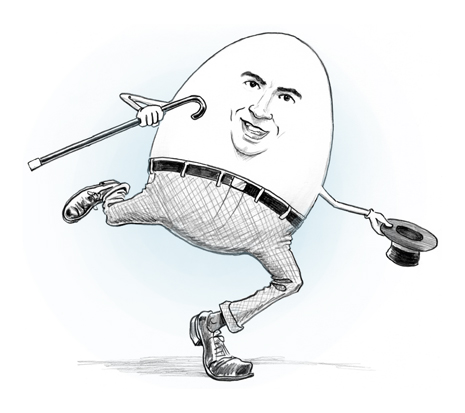 There are mentions of the Egg dance in a number of historical records; An old comedy, The longer thou livest, the more Foole thou art, by William Wagner features a poem describing the protagonist dancing around an egg on one foot. This was also noted in the 1867 book The Sports and Pastimes of the People of England. An 1895 issue of The American Magazine referenced an Egg dance for the wedding of Philibert of Savoy and Margaret of Austria on Easter Monday 1498. It was titled, ‘the great egg dance’, the special dance of the season. In it in an account of the young couple who had to dance across a floor of one hundred hidden eggs covered by sand in order to wed without opposition. Only after successful completion of the dance without breaking any eggs, were they able to get engaged without difficulty.

For a time the egg dance even became a competitive sport; In his Proverbs from 1556, John Heywoode documented that there were prizes awarded for sixteenth century hopping contests. It was also immortalized in works of art such as Pieter Aertsen‘s 1557 painting titled The Egg Dance, depicting participants moving the egg within a small designated area from a bowl with only the feet, and all without touching other objects on the floor.

In the late 1700’s, John Durang, the first noted US born professional dancer and George Washington’s favorite entertainer, helped make the Egg dance  known to American audiences. Best known for the hornpipe dance, which was one of the main dances performed as an egg dance, as part of a touring circus, he performed the egg dance blindfolded on a scene covered with eggs.

Although egg dances were such a popular act in Europe and America during the eighteenth century, even as recent as the last few decades, egg dances were still commonly performed at popular theater companies in London. Here the level of difficulty of the dance had been increased from just dancing around a single egg to dancing blindfolded to live music while navigating forwards and backwards in between many more eggs without touching them.

Although present day Easter tradition has evolved to seek hidden eggs and eat them rather than just dance around them, the legacy of the egg dance lives on through folklore, literature, works of art and more.