A Brief History of Swing and Balboa in Southern California

Swing – like most vernacular jazz dances – cannot be reduced to a singular definition. Swing dancing refers to a group of dances which developed in the earlier half of the twentieth century. These dance forms flourished under the same popularized jazz style of music, however, each dance variation picked up influences from old folk dances, previous dance fads and regional histories.

Today, the most popular form of swing dancing is Lindy Hop – a variation of swing popularized in the ballrooms of New York. But did you know that swing dancing in Calfornia developed its own variations of swing? Dances such as Balboa, Bal-Swing, Western Swing and Laminu evolved under many of the same musical influences as Lindy Hop but adapted their techniques and presentation to fit the crowded ballrooms, Hollywood films and music popularized by western musicians. 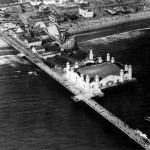 The art of swing dancing is influenced by many cultures and traditions, from the Afro-Caribbean slaves to the popular dances of the late  nineteenth century (Tango and Waltz) and early rag-time jazz dances (Fox-Trot, Cakewalk, Castle Walk and Charleston), while dances such as Truckin’ and Black Bottom are known to have preceded the swing dance craze in the US. Sometime in the 1920s, jazz music began to evolve again. As the radio became more accessible, musicians from every corner of America began adding their own spin on jazz. The driving rhythm sections of “traditional” jazz began to adopt a swingin’ eight count and incorporate more classic melodic instrument players for a homophonic sound. In 1935, Benny Goodman brought this “sweet” jazz to the Palomar Ballroom of Los Angeles and transformed the local dances.

Now, since the turn of the century, California dancers had been packing coastal ballrooms to do the waltz, fox-trot and the like. There were local variations of popular dances and dances (or dance steps) completely unique to local communities. And unlike New York City with its plethora of jazz clubs, Los Angeles and Orange County were so spread out (and rural) that there were designated hot-spots for everyone in the area – in other words…one very crowded ballroom.As jazz and swing became popular across America, southern California dancers had to adapt to their sardine-like conditions.  Southern California was experiencing a population boom, and with the extension of the trolley car from Los Angeles to the end of the Balboa peninsula, more and more dancers ventured to the Rendezvous Ballroom at the end of the line in Newport Beach.  It is in this period that a dance called Balboa evolved.

The Balboa & So Cal Swing

Balboa, also referred to as Pure or Strict Balboa is a closed position jazz dance where partners remain embraced as their (less restricted) feet play with swing rhythms.

Eventually, more people could easily afford individual cars for traveling around town and ballrooms popped up around town.  This probably allowed for more room on the dance floor as a new generation of young teens began breaking away from their partners to experiment with wild swing movements.  This southern California swing (Bal-Swing) was similar to its Lindy Hop cousin but with a style all its own. 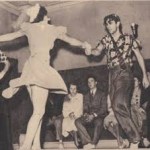 Dancing at the Rendezvous Ballroom 1938

Hollywood also picked up on the popularity of dancing and hired a number of these young social dancers to act as extras or performers in bit movie parts.  To please the camera, SoCal dancers adapted linear movements and flashy jitterbug antics.From here, the dances all took different directions. SoCal Swing dances kept some of the balboa dance lines and rhythms yet opened up for new turn combinations and spins while Lindy Hop from New York (and similar swing dances elsewhere) began to encourage new athletic and dynamic movements. Around this time many of the swing dances begin to take on similar characteristics as movies and migrations spread the same pop-culture around the nation. And then, the music changed…

Towards the end of WWII, musicians seemed to either shy away from playing for social dance crowds in favor of intimate settings and experimental opportunities; or moved on to new popular, simplified blues rhythms – rock and roll or r&b.  In California, western swing moved out from the shadows of its jazzier cousins and musicians like Spade Cooley packed barn dances throughout LA and OC.  Dancing, again, had split off to follow the new musical influences.  So Cal swing broke off into jive for the rock and rollers, western swing from the country folks, and jump blues for fans of both styles (just to name a few).

Western Swing or as it is eventually called, West Coast Swing, is sophisticated and simple.  Dancers began to smooth out the steps into slotted patterns but kept the swing alive in other ways.  The music transformed over the 50s, 60s, 70s and dancers adapted their patterns so they could west coast swing to nearly any style of music.  Even now, many modern west coast swing dancers are able to incorporate hip hop and contemporary movements into their dancing.

For More Information about Swing in Southern California, check out this awesome video lecture from Peter Loggins.