Jazz music is a purely American art form that has fueled many of the cultural and social revolutions of our nations history. From the glitz and glamor of Hollywood to the renaissance of Harlem and  to the low down charisma of New Orleans; Jazz music was there to inspire and start a movement. Taking inspiration from the past, we’ve formed a hot, new “dance group” under the name, Hot Club Stomp! Aiming to re-energize those times of a classic era by bring them into the modern light.

Hot Club Stomp brings together some of the premier Lindy Hop, Balboa, Collegiate Shag, Charleston and all around Jitterbug dancers ever to come out of a ballroom in one mega crew! This crew does more then just partnered dances, they specialize in some of the classic jazz era entertainment such as fabulous Chorus Line acts, tantalizing Fan Dances, rhythmic Tap dancing and eccentric solo dance acts. 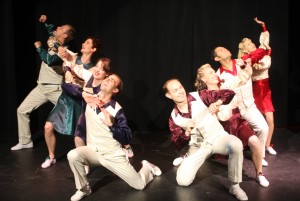 Many of the member of Hot Club Stomp have been featured in many of Hollywood’s blockbuster hit shows! Nick Williams was featured as a head choreographer on one of the best shows on TV, FOX’s hit, “So You Think You Can Dance.” Nikki & Shesha Marvin, Laura Keat & Jeremy Otth were the featured dancers for this punked out lindy hop number on the biggest dance show on TV, ABC’s mega ballroom show, “Dancing With The Stars.” On top of that we were prominently featured as dancer, ambiance and soldiers for Katy Perry’s moving love ballad, “Thinking Of You.”

Our most recent performance appearance was for the Honeywell Corporation in Phoenix, AZ where we put on a great 45 minute show with 3 acts. The Theme we were given was “Dancing Through The Decades.” So we in turn took the 1930’s, 40s and 50s and gave them the best of what we had! A scripted show with funny transitions and great dance and musical entertainment for all of the 700+ in the audience.

Each of the members of Hot Club Stomp has spent an extensive amount of time and energy on training and learning all these vintage dances. We work all the time on the creation of pieces that we can then turn over to the public to enjoy!

For more information, come to our amazing new website for today!