Fun Fact: “Loves to bash on the horde!” (if you’re wondering, what on earth this means, then keep reading along for explanation)!

Originally from Albuquerque, New Mexico. Joe started off working graveyard shift as a data processing clerk for a bank. This left him isolated from social interaction for the majority of his work week, which made him so timid, that he once panicked if a lady were to engage him!

So how did this very shy guy transform into such a charismatic tango professional? Joe never realized that dance could be a social activity, much less something he could make a living doing. His first dance experience was attending a religious retreat some 24 years ago. It was there that he discovered Country 2-step dancing. He was captivated and intrigued just watching couples enjoy the dance and each other. He began taking lessons at a local ballroom and became so addicted, that when faced with the need to transfer out of state with his company, he took a leap of faith, gave up his career and stayed behind to pursue an opportunity to train to become an instructor. While eating breakfast one day, Joe had an epiphany that since he was most happy dancing, he wanted to pursue it as a career.

Joe’s first dance styles were Country 2-step and salsa. A couple of years later he began learning all of the ballroom dances. One night while out salsa dancing Joe watched a live tango dance performance that dropped his jaw and inspired him to pursue tango, so he sought out the top professionals to train with. While in Albuquerque Joe and other coworkers regularly flew to Southern California for special trainings. He became so dedicated to his craft that he accepted an opportunity to move and teach in Orange County, where he would drive hours to social dances nightly after working all day. 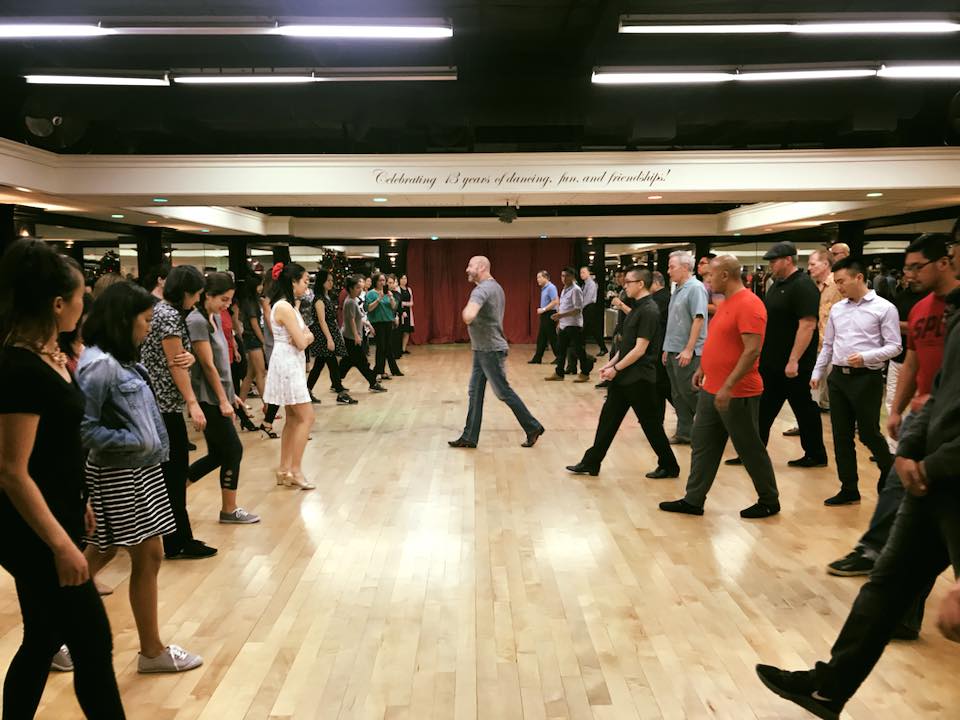 Joe enthusiastically demonstrates footwork to one of his many classes.

Of all the dance styles that Joe has studied, he found Argentine tango to be the most intuitive, allowing some of the greatest play with emotions. “Salsa is a happy dance, waltz demure and regal, foxtrot a walk in the park, west coast Swing slow and sexy with spurts of excitement. But with tango, a person can experience a full spectrum of emotions all within a single song!”, proclaimed Joe. “On top of which both the leader and the follower have free reign to play with the music as desired, therefore transforming the dance not just into another style, but a conversation between the couple without words.” Suddenly so consumed with his new hobby, when he began subconciously adding elements of tango into every other dance, he decided it was time to specialize solely in Argentine tango. Serendipitously, it was then that ATOMIC owner Shesha invited Joe to join the ATOMIC family. Joe describes that moment as a breath of fresh air. He found that ATOMIC’s laid back atmosphere suited his own relaxed teaching style, and the warm, friendly staff and students helped make the environment easy to work in. Like most, he also enjoys the annual student teacher showcases.

In addition to performing and choreographing for several showcase routines, Joe also teaches numerous group classes each week where students learn basics, patterns and lead-follow concepts. He stresses the importance of private lessons, which hone in on the subtle nuances that can’t be addressed in a group setting. Privates are custom tailored to each individuals needs and due to the complexity of tango, one private has been said to be the equivalent of about 20 group classes! Joe added, “The commutative language and dialog of creating the fluidity from lead and follow are best explained in the taking of private sessions! This is where the gems are truly discovered, and you just can’t beat the knowledge that one attains through the individual attention catered directly to you!”

This smooth stepping dance man loves playing video games, especially World of Warcraft, where he eagerly boasts a level 110 Warrior and loving to bash on the horde!

Favorite accessory : Joe is known for his trendy jackets and stylish fedoras.

Other favorite activity : Spending Sunday mornings with his wife riding bikes after eating breakfast out, following their movie night on Saturdays.

What dance means to him : Social interaction and exploring a range of emotions through movement and connection.

Joe teaches at ATOMIC almost daily, and by appointment for private lessons. Come experience his decades of expertise in action! https://atomicballroom.com/calendar.php