The first day of the 2015 Chinese New Year, also known as the Spring Festival, is on February 19, 2015. The festival lasts from 7-15 days and will mark the transition from the year of the horse to the year of the sheep. Annually there are grand celebrations throughout the world, some of the largest in areas throughout China, Singapore, Malaysia and Thailand; as well as in Vancouver, Toronto, Lima, San Francisco, New York and Los Angeles – which have some of the largest Chinese communities outside of China. As with many cultural festivals, Chinese New Year is a time for togetherness, food, music and and of course dancing.

With 56 officially recognized ethnic groups in China alone, and each ethnic minority having its own folk dance, one could imagine the great variety of dance styles there are in traditional Chinese culture. This is in addition to the eventual influx and popularity of international dances like ballet, contemporary and ballroom, which eventually became part of the Chinese dance landscape.

Historically dance was used as an important form of expression in rituals and ceremonies, and dancers often seemed to dress up as animals and mythical beasts. Some traditional dances such as the long sleeve dance performed today date back as far as the Zhou Dynasty from 1046 – 256 BC. Today, two of the most symbolic, recognized Chinese dances are the Dragon Dance and the Lion Dance. The later dating all the way back to the Tang Dynasty from 618-907 AD. Although synonymous with present day Chinese culture, the Lion dance was considered a foreign import during its inception as lions were not native to China. At present day there is a Northern Lion Dance, a Southern Lion Dance, as well as international competitions like the World Lion Dance Championship (shown in video clip below), where dancers go head to head against top competitors from across the globe. Watching these athletes gracefully leap from beam to beam so high above the ground, with limited vision while lifting each other is nothing short of exhilarating!

Although it doesn’t resemble its modern form, the Dragon Dance has been noted as far back in history as the Han Dynasty (206-220 AD), and is still widely performed today. Historically the Chinese dragon was performed during times of drought since the dragon was associated with rain. The present day Dragon Dance usually involves anywhere from a dozen to hundreds of performers using poles to manipulate the dragon structure typically made of silk, bamboo and paper and sometimes stretching up to 100 feet in length. There are about 700 different dragon dances, many of which are often the highlight of the lantern festival.

Many of the folk dances served a vital purpose in every day life such as the Constellation dance which was performed to procure as much seed and grain as there are stars in the sky; the Plough Dance which was connected to Shennong, the god of agriculture; and the numerous other dances associated with hunting, harvest and the gods connected to them. Many other folk dances like the Mongolian Bowl Dance, the Lantern Dance and the Lhamo (a Tibetian opera), reflected significant aspects of Chinese culture and way of life. Despite folk dances playing such an important role, throughout Chinese history, many rulers opposed them and tried to ban these dances and other forms of artistic expression over various Dynasties.

If the Tang Dynasty was considered to be the golden age by many historians, the succeeding Song Dynasty (960-1279) with its thriving economy and RADIANT culture, was the epitome of everything golden. Elements of theater began to flourish as the Chinese opera began to take shape, becoming as one with dance. Many dances including the Sword Dance were found in opera. Elements of which can be seen in popular, modern pieces today such as Shen Yun, which currently tours the world featuring a mix of classical ballet,  contemporary and traditional dances in a dramatic spectacle. Today China boasts a number of ballet companies which use the Russian training system, as well as groups that use modern choreography on ancient themes such as the Rainbow-Feathered Dress Dance of the Tang Dynasty. 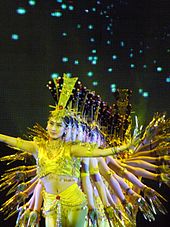 For thousands of years Chinese dance has served many other purposes, such as its synergistic relationship with the martial arts and its functional role as prescribed exercise (Chinese fitness dancing) dating back to the time of Emperor Yao (2356-2255 BC).

Dance was used to tell stories, and as folklore as an artifact of sorts, in preserving history. Despite the sometimes oppressive political attempts to silence the arts, a resurgence occurred and the dance lived on to eventually flourish.