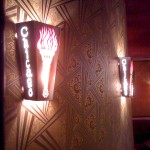 or ‘Shani’s Adventures in Swedish Swing’

This past fall, your Atomic Blogger in residence finally got a chance to make her pilgrimage to Sweden for 3 months of Balboa, Swing, and snow!  Why Sweden? Well, I’ll tell you…

Have you heard of Herräng Dance Camp – the 30 year running summer dance camp held in the wood outside of Stockholm?  For 3 decades, this camp has pulled a number of original Lindy Hop dancers (like Frankie Manning, Norma Miller, Dawn Hampton, Chazz Young and many others) out of retirement to reconnect with passionate young students.   Going to Herräng is a dream pilgrimage for many swing, lindy hop, balboa, and boogie dancers.  I really wanted to make this years camp since for our simultaneous 30th birthdays, but it was not possible – so I made other plans.  I decided I would move there for few months…

That’s right, a few months!  For years I have heard about the thriving social dance scene in Stockholm.  And I have met some amazing dancers, performers and instructors from Sweden – Skye & Frida will be coming to Inspiration Weekend.  Then, a few years ago, I became great friends with some of the super talented balboa dancers in the Stockholm and Uppsala areas.  And that was it – the impetus I needed to visit one of the oldest and great capitals of worldwide the swing dance revival outside of Southern California.

Since I am a huge balboa enthusiast, I figured I would go for the annual Sweden Balboa Weekend (at the end of September) and stay through the New Year for an epic experience at The Snowball.  And with several weekly venues in the two towns stretched 40 miles apart and flights to other events in Europe, I would have no problem getting my lindy hop fix.  So I grabbed my laptop, some warm clothes and was off!

Sweden Balboa Weekend is an annual event hosted by the Stockholm and Uppsala balboa communities (alternating years).    And this past year, some of the best balboa and swing dancers in Europe flocked to the picturesque college town of Uppsala for SBW 2012.  Held in a lovely venue – awesomely located in the center of town – international and local instructors  offered a multi-track workshop, while at night, DJs and live band keeps the dance floor shuffling.  And shuffle they did…

I was in balboa heaven between the fast floor and incredible talent!  While the (central) Swedish balboa dancers are inventive and passionate, they seem to have a strong connection to the smooth style and classic movement of the original California old-timers.  For this California-girl, a little of the familiar dance connection in a new social context was an inspiration – especially considering we are separated by 5500 miles.

If you’re interested in going to SBW 2013, it will be held in Stockholm – which I am sure will lend more of its ‘big city’ charm to the event.

After a few weeks visiting friends and social dancing in Uppsala, I took a short ride south to Sweden’s capital city, Stockholm.  This incredibly picturesque metropolis sprawls over a series of island between a lake and the sea – like a giant Newport Harbor.  And even more amazing is the fact that they have several dance venues offering weekly classes, social dances and mini-workshops.  I can’t say enough wonderful things about the venues and the Stockholm swing community who was very warm and welcoming to newcomers.

Whether they’re practicing choreography for a team performance, working with their partners for the next competition or trying to perfect that Al Minn’s shimmy, the Stockholm swing community works hard on their dancing.  But they sure know how to have fun too…I hear there are even little underground swing clubs lindy-bombing at local restaurants with excellent live music.

If you’re swinging through Stockholm or want to know more about the places I went, check out some of these dance sites:

Ah The Snowball 2012-2013 – I survived 7 straight nights of swing dancing!   Anyone who attends the full week of events at The Snowball (or its American counter-part: Lindy Focus) should receive a merit badge for managing to make classes during the day only to stay up on the social floor through the dawn, take a nap and do it all over again.

The best thing about  The Snowball this year was the EPIC band battle between Sweden’s Gentlemen & Gangsters and America’s Gordon Webster Band featuring Steven Mitchel and Naomi Uyama.  I heard the commotion all the way up in the Balboa room and ran down just in time to see the last song battle which involved a 2nd Line and crowd surfing.  I cannot put into words the antics and burning hot trad jazz that poured over the audience.  You’ll have to see it to believe it!

Epic Band Battle at The Snowball 2012

Although it is great to be home, I fully caught Stockholm Syndrome.  As a full time swing dance hobbyist, it’s hard for me to imagine calling anywhere but Southern California and Atomic Ballroom my home.  However, I left my heart on the dance floor in Sweden, and I WILL being going back for Herräng (or any other excuse you or I can come up with to get back there) one day soon.  Either way, it was a wonderful chance to revive dance exchanges across international borders.