Waltz in Swing Time: A Lindy Hopper Explores the Waltz 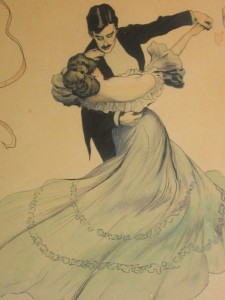 The waltz - beauty, elegance, and grace on the dance floor.

I have always loved and admired the grace and beauty of the waltz. Watching couples elegantly circle the dance floor in perfect time reminiscent of an age often romanced, although watching couples waltz, it’s not hard to see why.

After writing and researching the differences between International and American Ballroom, I started delving into the different forms of the waltz, because, as it turns out, there are quite a few variations.

We often associate the waltz as the dance of the upper class: ladies in long ball gowns and gentleman in tuxedos parading around the dance floor like proud peacocks on display. But the waltz evolved from much lower-brow status, and was actually a dance created and perfected by the lower classes of society.  Dances like the Fandango and the The Ländler all contributed to the making of the waltz.

The closed body position, and dancing connected with a partner, was considered to be absolutely indecent, especially at a time where the only physical contact a couple had during dancing might be when they held hands during one of the peasant dances. This is a bigger deal then we would think today, since women only earned the right to shake hands with their male counterparts during the 19th century, and even then only if you knew the person intimately. Dancing was a large part of the courtship ritual,

The waltz being performed in an Hungarian saloon circa 1820.

and one of the only socially acceptable means of courting someone, so even this close and limited contact had to mean something.

In the Victorian Era, many highbrow nobleman were throwing off the formal balls of their own class to attend the dances held by their servants. There the dancing was considered raucous and inappropriate by their standards, and it was here that the gentleman first learned about the waltz. The members of the upper crust enjoyed the dance so much that they elevated it to the high-brow dance we associate it to be today.

The Viennese Waltz is the original version of the waltz, and still one of the oldest dances still danced today. If you went to a ballroom in Europe, this is the waltz that would be danced, as the version that most of us know as the waltz is actually a slow waltz.

The Viennese Waltz is considered to be the most difficult of all the waltzes. To execute a correct Viennese Waltz your foot positions are critical and are based off of ballet. This is danced to faster tempo music and involves a lot of turning, as a true Viennese Waltz consists only of turns and change steps.  As you can see in the video below, the couple continuously moves their feet as they turn, and they never break from the closed body position.

The International Standard Waltz is danced competitively, and is the slower version of the waltz. Like it’s Viennese counterpart this waltz is danced in the closed position. It is a progressive dance, meaning that dancers travel across the floor following the line of dance. Dancers combine the slow footwork with quicker combinations and poses to create style, elegance, and contrast while dancing.  But the most important difference is that if you see partners waltzing and breaking contact, they’re not doing International Waltz.

The American Standard Waltz incorporates many open positions where the couples break away from each other partially, if not entirely.  The dance also embraces underarm turns, solo spins and solo movements that make it stand out from it’s International counterpart.

The dance incorporated breaks in the middle of the step, or hesitations, where the follow would raise one of her feet as she dance with her partner. They would pause for a beat or two, and then move forward, continuing in the same waltzing step.  When dancing the Hesitation Waltz it always looks better if the hesitations are dictated by the music.  Acrobatic moves were added during the hesitations that made it almost impossible for the average dancer to perform it, and it fell out of favor.

And of course, my favorite – Fred Astaire’s “Waltz in Swing Time.”