DWTS Finale: Nobody Puts Baby in the Corner 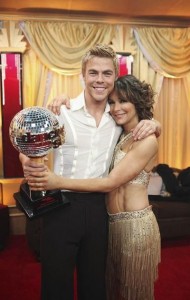 In DWTS least surprising finale, Team Baby Derek has won the Mirror Ball Trophy.  O.o – that’s my surprised face.  And yes, I’ve been waiting to use that line all season.

There’s no doubt that Jennifer Grey and dance partner Derek Hough worked hard and earned the title.   But given that their competition was voted off just last week (Brandy and Maks) this really didn’t come as a surprise.  Lacey and Kyle were definitely contenders to win but never amassed enough of a popular following to guarantee that they’d get the popular votes they needed to place.  It’s a shame, because I’ve loved watching this sassy and fun pair tear up the dance floor each and every week with their own unique style.

Then there’s Bristol.  In what may be DWTS most controversial contestant yet, the rumor mill was running at full tilt as the finale approached, running the gambit from mass efforts of the Tea Party to make sure she had staying power to Sarah Palin pulling strings to make sure she stayed on the show.  I think it’s more simple than that – America voted to keep here there.  It’s not the first time that a less talented dancer has made it to the finals and I will give credit where it’s due and say that she’s improved as a dancer over the last ten weeks.  She blossomed from a shy, reserved woman into someone who could step out onto the floor with confidence and I applaud her for that.

However many are calling for DWTS to re-examine their voting methods, which executive producer Conrad Green says works just fine.  Maybe America has finally tired of “reality” television that’s only determining factor is how popular you are and maybe, just maybe, we’re ready for a dance show that showcases real merit and dance talent.

Anyways, a big, hearty congratulations go out to Jennifer and Derek, who earned their spot in DWTS‘s history as the Season 11 winners.