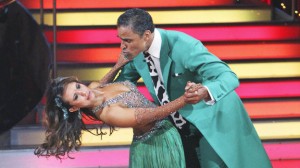 Last night DWTS said goodbye to Rick Fox and the former Laker left the dance floor for the final time.

Again, this elimination comes as a bit of a shocker, as Rick scored higher than both Bristol Palin and Kyle Massey.  Like Bristol, Rick has shown real progress over the last few weeks as a dancer, and has been more consistent.  But America voted and that’s the vote that counts.

Honestly, between the two star athletes I thought it was going to be Kurt who was eliminated this time around.  His 1000watt smile must be casting a magical spell on America so that they’re making sure he’s safe as I found his dancing to be a little wooden.  Between these two I thought Rick nailed the dance and that Kurt just hasn’t stepped up his dancing to the level of the rest of the competitors.

With five couples remaining I’m curious to see what DWTS will do next week to add to the flair of the shows (I really enjoyed seeing the team competitions as I think it helped make everyone a better dancer) and who the guest musicians will be (last night featured the unusual – and by unusual, I mean a little weird – combination of Taylor Swift and Rod Stewart).

As always you can catch last night’s episode online and stay tuned for next week’s edition.