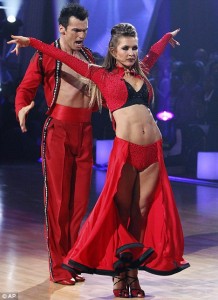 Audrina Patridge has danced her final dance on this week’s DWTS.  And again, I’m a bit shocked.

When the only real criticism that the judges could come up with was that her face wasn’t as expressive as they’d like it to be and really I think they were unduly harsh.  Compared to some of the other dancers who are remaining Audrina has been a solid performer throughout the competition, and this week was no exception.  The one thing I’ve always liked about Len is that he’s always been fair, and last night he agreed that seeing Audrina and Tony and Jennifer and Derek in the bottom two was nothing short of an outrage.  I’m pretty sure by this point I was yelling at my television in agreement.

As much as I love the star athletes it should have been Kurt who walked away last night – and I can say that even though I’ve developed a mad crush on this dancing footballer.  But apparently America loves an underdog more than they love a good dancer.  The only thing that wasn’t a surprise last night was that Brandy and Maks were safe for their stellar tango performance.  But it does show that Jennifer and Derek need to step it up if they want to hold onto their top spot.

You can watch all of last night’s dance-action here and stay tuned for next week.