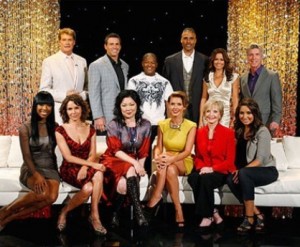 The cast of DWTS Season 11.

DWTS premiered last night, with dancers performing either the Viennese Waltz or the Cha-cha-cha.

Out of everyone who danced last night I think we have three dancers who are going to be contenders for the mirror ball trophy.  Jennifer Grey proved that she is definitely one to watch and that she remembered all the skill she learned on Dirty Dancing. I think her Viennese Waltz made made Patrick proud last night.  Brandy, also a trained dancer, looked lovely and graceful performing her Viennese Waltz with partner Maksim Chmerkovskiy. Kyle Massey absolutely lit up the dance floor with his cha-cha-cha and I think he’s going to be going head to head with Brandy and Jennifer for the trophy.  He had spark as well as technique, and it really came across in his dancing.

The real disappointment of the evening was not  Mike “The Situation” Sorrentino’s dancing, although in my opinion he should be the first to exit the competition.  The real disappointment was Margaret Cho, whose comedic additions to her dancing ruined an otherwise lovely Viennese Waltz.  She actually can dance, and it’s unfortunate that her silliness impeded on well, EVERYTHING that she was doing correctly.

David Hasselhoff danced with his face (no lie) as he moved more there than anywhere else during his cha-cha-cha and I think he only managed to actually do three cha-cha-cha steps in the midst of all the flash and hoopla.  That being said, he was certainly more fun to watch than “The Situation” so I’d rather that he stayed on the show for a few more weeks – and yes, I backed that thought up by dialing the 800 number and voting for him. 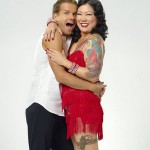 Here’s the rundown of the scores from the evening:

We’ll find out tonight who gets to keep dancing and who will exit the dance floor.