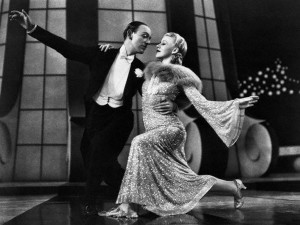 Can’t act. Slightly bald. Also dances. This was the review that RKO’s David O. Selznick gave Fred Astaire after his first screen test.  The man who would arguably become one of America’s top dancers and did more than anyone else to revolutionize the world of dance was once panned by studio heads, and a memo sent out by Selznick indicated that the only thing Astaire had going for him was his charm.

What many people don’t realize is that long before Astaire was paired with the likes of Ginger Rogers he learned how to dance from one of the first women to come into his life: his sister, Adele. Born Frederick Austerlitz to a family of German-Austrian immigrants in Omaha, Nebraska it was at the behest of his mother, Johanna, that he and his older sister, Adele, be groomed for show business.  Their father, Fritz, was gainfully employed at a brewery, but Johanna dreamed that her children’s talents would take her away from the plains of Nebraska. 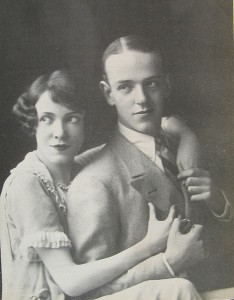 Early on Adele proved to be an excellent singer and dancer, and, refusing dance lessons, Fred instead picked up the piano, accordion, and clarinet, but the closest he got to dance was mimicking his sister’s movements.  When Fritz lost his job the family relocated to New York City to launch the children into their entertainment careers.  Fred and Adele took singing and dance lessons, and adopted the Astaire (legend has it after an old family name) in preparation for their first vaudeville review.   Their dance partnership continued until Adele married and left the world of entertaining.  They were well matched – Adele’s personality, humor, and singing voice balanced out Fred’s quiet demeanor and superb dance skills.  It’s is interesting to note, though, that as well as Fred would be known for his charm, Adele was considered to the big draw to their performances. 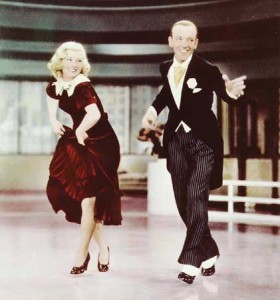 In 1933 Astaire was paired up with Ginger Rogers for the first time in Flying Down to Rio, and their on-screen chemistry was electric.  But while the public clamored for more Astaire-Rogers’ pairings, Fred wanted no part of it.  “I don’t mind making another picture with her, but as for this team idea it’s out! I’ve just managed to live down one partnership and I don’t want to be bothered with any more,” he wrote to his agent.  Being the consummate entertainer Fred finally acquiesced, and their on-screen legend was born.

Fred’s dancing virtuosity did not happen by accident.  His reputation as a perfectionist was legendary, and Fred would rehearse upcoming dance scenes for two weeks before filming started so he could get it right in as few takes as possible.  When the setting was deemed too sparse to showcase Astaire’s dancing on “The Belle of New York”, Fred was able to recreate the first take identically, still capturing the subtle gestures and nuances that made the first take a success.

Astaire was influenced by Vernon and Irene Castle, the couple who brought ballroom dancing to the forefront of the American social dance scene.   As an accomplished tap dancer, Astaire’s influence on ballroom dancing was to combine movements and steps most noticeably only found in tap, swing, and jazz dancing.  And yet, the real grace of Astaire’s dancing is that every movement is simultaneously economical and flared with his own brand of style.  His endless hours of practice ensured that every time he danced he danced flawlessly.  He was no less of a perfectionist with his choreography, spending hours in front of the mirror and working out a routine step by step until his dance fit the music, story, and song of a film.   Click here for more information about this dance legend.