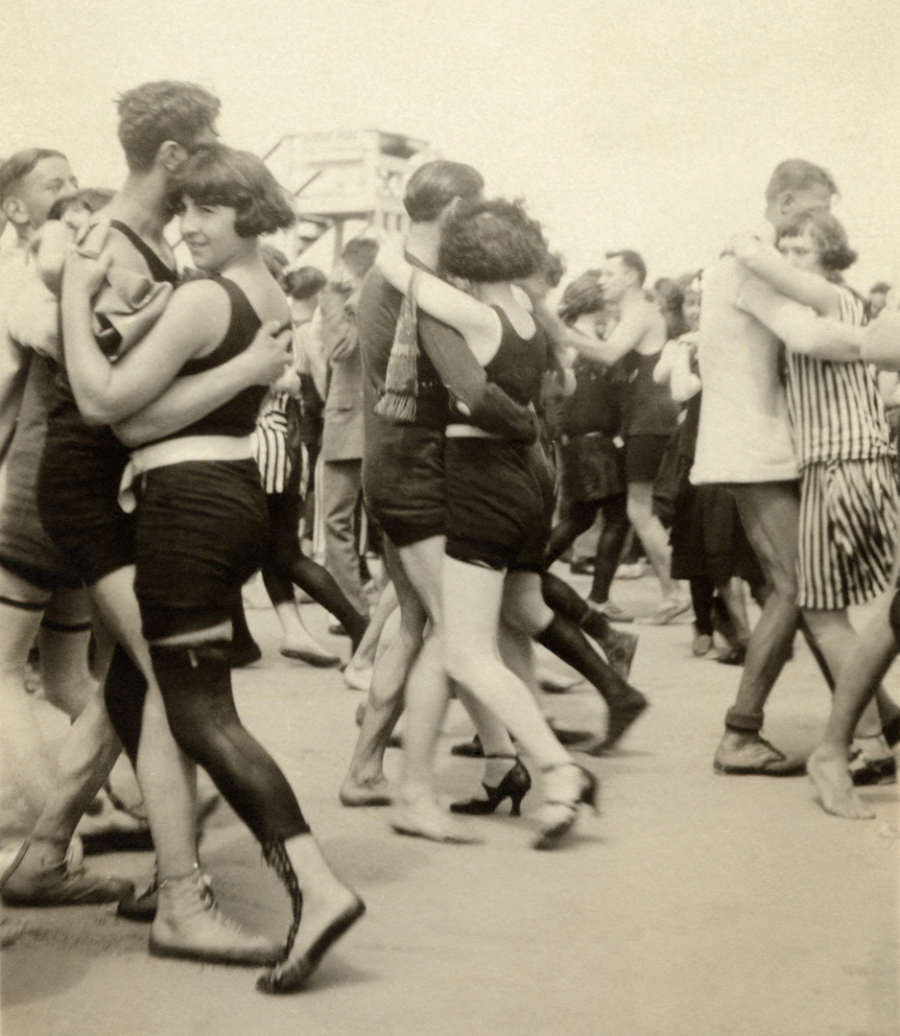 The slow drag is an American social dance originally performed to ragtime music, and has been resurrected as part of blues dancing.

The slow drag, first performed in the African American community of New Orleans in the 1890s, incorporates elements of traditional African dances. Ragtime composers, including Scott Joplin, wrote a number of slow-tempo tunes appropriate for the dance. “They would just hang onto each other and just grind back and forth in one spot all night”.

A cornetist who played during the 1890s described the music where the Slow Drag was done, in the “less fashioable groups in town”, as “more raggy” than the music that was played for the more “high toned” dances.

Slow Drag was one of ten dance themes ragtime composer Scott Joplin included in “The Ragtime Dance”. “The Ragtime Dance” was written in 1899 and consisted of a vocal introduction followed by a series of dance themes introduceb by a vocalist. “The Ragime Dance” was performed once in Sedalia with four couples dressed in their own most festive clothing performing the steps to Joplin on the piano playing with a small orchestra.

Joplin also included a Slow Drag in his opera Treemonisha, also choreographing the work. His “Directions for the Slow Drag” were: 1. The Slow Drag must begin on the first beat of each measure. 2. When moving forward, drag the left foot; when moving backward, drag the right foot. 3. When moving sideways to the right, drag the left foot; when moving sideways to the left, drag the right foot. 4. When prancing, your steps must come on each beat of the measure. 5. When marching, and when sliding, your steps must come on the first and third beat of each measure. 6 Hop and skip on second beat of measure. Double the Schottische step to fit the slow music. Another Scott Joplin composition, written with Scott Hayden, is “Sun Flower Slow Drag”, written in 1901.

Sheet music published in 1906 juxtaposes rural blacks with the music in “The watermelon trust; A slow drag” written by Harry Thompson. “A down home shout; Characteristic slow-drag two step” by Herman Carle was published in 1907.

In the late 1930s Jelly Roll Morton’s music was cosidered old fashioned and obsolete. Morton recorded “Slow Drag” ragtime songs that were by then out of step with mainstream jazz by the time Louis Armstrong and Earl Hines recorded together in 1928. His creole melodies and rhythms are closely connected to the Caribbean with its mixture of African, French, Spanish and Mexican people.

“The Dream” (c. 1880) is a slow-drag, whore-house number; popular with the musicians of the generation before Morton. They called it “Spanish” because of its tango or habaniera beat. (The habaniera had previously arrived in the Caribbean from West Africa.)

In the decades that followed, it spread throughout the American South and was most popular in semi-rural juke joints, where it was danced to the blues. Buster Pickens, who was born in 1916, described people doing the slow drag to “slow low-down dirty blues” in barrel house joints.

In 1929, the slow drag became the first African American social dance to be introduced to Broadway audiences, in the play Harlem. One description of the dance as performed in the play was “a couple dance in which a man and a woman press their bodies tightly together in a smooth bump and grind as they kept the rhythm of the music”. It scandalized white critics with its raw sensuality. Many members of the black community were incensed by this picture of the underside of black urban life.

The Slow drag never gained the popularity of other dances derived from African American dance forms, such as the Charleston. Few films of the dance survive.

The swing revival helped renew interest in the slow drag, which is acknowledged as one of the many antecedents of swing dancing. A version of the slow drag is taught today in blues dancing.