In the late hours of January 9, 2012, Hal Takier – a legendary swing and balboa master – passed away in his Orange County, California home after several days of declining health.  He was an avid Jitterbugger and Balboa dancer for over 75 years and would have been 95 this February!!

For those of you who have not yet heard of Hal Takier, I will tell you a little bit about him and where you can find out more about a man who has inspired a generation of Balboa and Swing dancers.  But the most amazing thing about Hal was his dancing – even at 90+ years of age, he’d jump up to dance at the fastest tempos!!!  And thanks to diligent research and documentation, we can share videos of Hal dancing as a young man.  These short clips in movies or obscure footage became the cornerstone of a modern Balboa community.

Hal Takier grew up in Los Angeles, California when jazz was hot and every little neighborhood had a ballroom packed wall to wall with dancers.  Always the passionate music lover, Hal began dancing around the age of 18 in the mid 1930’s.  Back then, many of the young kids taught themselves to dance by watching, trying and refining their steps.  He, along with his partner and first-wife, Betty Roeser, quickly gained notoriety as ruthless executors of extremely fast and engaging dances in competitions around LA. 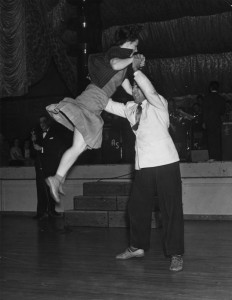 Hal and Betty joined Maxie Dorf, ‘Lolly’ Wise, Gil Fernandez and their partners as the Ray Rand Swingers.  This group of LA swing dancers were hired to perform or compete at dance halls, ballrooms, films and special events.  You will see in the clips below, that Hal had a particularly energetic way of swing dancing.  He jumps around, incorporates air steps, and still keeps up with extremely fast tempos.  This spirited dancing and ambitious drive to win competitions landed his image in print and film.

Through the 1960s until just a few years ago, Hal and his second-wife Marge, spent their free time continuing to swing dance with friends on a regular basis.  With the revival of swing in the 90’s, young dancers from Southern California honed in on swing dance styles seen in Hollywood Swing Era film.  It was not long before they discovered Hal, Marge, and the rest of the surviving  ‘old timers’.  And Hal, like many others, were thrilled to support the burgeoning swing dance community by sharing their dance knowledge with a new generation, attending local lindy hop events, breaking down steps and ideas, giving interviews, and telling stories.

Hal was one of the greatest.  And because he is preserved in film and historical records, his style and moves will continue to influence generations of swing dancers to come.

Videos of Hal dancing as a young adult (and the knowledge he passed directly to the current generation of swing dancers) has been a great influence on many of the best Balboa dancers and instructors of today.  The following are two videos of contemporary swing dance champions.  This first video is a re-creation of Hal & Betty’s Maharaja Soundie by Orange County dancers Jeremy Otth and Laura Keat.  Jeremy and Laura diligently studied a lengthy and difficult choreography – not only do they honor Hal and his contribution to dance but they become vehicles for continuing his legacy into the future.

This second video was posted online just a week ago, before we knew of Hal’s declining condition.  The moment I saw this video my first thoughts were of Hal and his wife Marge.  Maybe it’s the playful spirit of their bad-ass dancing or maybe it’s the tan and camel pants worn by Balboa champions Nick Williams and Nelle Cherry, which evoke an eerie similarity to Hal and Marge’s signature style throughout the 70s and 80s.

When I heard of Hal’s passing, I found comfort in knowing that his influence and spirit will never be expunged as long as there are dancers out there (and right here) ready to carry on his legacy years into the future.