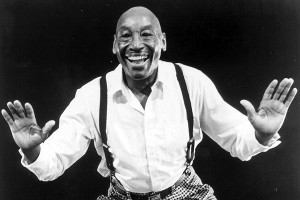 In honor of what would have been Frankie Manning’s 96th birthday, this Thursday, May 26, 2011 is International Shim Sham Day.  Get your dancing shoes on, suit up, and celebrate Frankie’s life in dance by Shim Shamming the night and day away.

If you wanna learn to Shim Sham (now you gotta!), you have to decide just which Shim Sham you’re going to learn, because there are several different versions of the popular line dance that anyone can do. The dance is often performed to the song “The Shim Sham” by The Bill Elliott Swing Orchestra.

Strictly speaking the Shim Sham is a tap routine that is comprised of 10 phrases of choreography, with each phrase lasting four 8-counts (or, for those who are good at math) 32 bars. Lindy Hoppers got a hold of the dance and removed the taps, with dance icons like Frankie Manning and Dean Collins adding their own steps and choreography to give this iconic line dance their own signature styling.

The Shim Sham began as a tap routine in Harlem in the 1920s, and was originally called the Goofus. Credit for the dance has been claimed by both Leonard Reed and Willie Bryant, who are the most likely suspects, but Joe Jones has also made the unverifiable claim that he had a foot in inventing the dance, too. Several sources I’ve found say that the dance got it’s name from the Shim Sham Club

What we do know for certain is that Jones’ dance troupe, the “Three Little Words” did help to make the dance popular, at a little place in Harlem called Connie’s Inn. The dance became a unifying piece that performers of all kinds could do together at the end of a show. Most sources cite The Shim Sham Club in New York as the first place it was performed (and, at least, got the recognition there), but it’s development came from the lesser-known Connie’s. And hey, the Shim Sham Shimmy sounds much better as a dance name than doing the Connie.

Al Minn & Leon James created their own impov-filled version of the Shim Sham. Filled with breaks, Suzie Q’s, and slides, their version of the Shim Sham is fun and silly. Al and Leon were members of Whitey’s Lindy Hoppers, and they perfected their style at the Savoy Ballroom in New York City. Al & Leon were tireless performers and teachers, traveling the world to promote Lindy Hop and jazz, and Al in particular was instrumental in the swing revival.

Frankie’s version of the Shim Sham is danced to either Erskine Hawkins’ “Tuxedo Junction” or “‘Tain’t What You Do (It’s The Way That Cha Do It)” by Jimmie Lunceford and His Orchestra. During Frankie’s version of the Shim Sham dancers will do the Shim Sham for half of the song, and then grab a partner and dance to finish the song out. It’s also common for the end of this dance to be “called,” telling dancers to “slow down” or “freeze,” and then yell out for everyone to “dance” to indicate that Lindy Hoppers should dance normally.

Here you hear Frankie Manning calling “you push it, and you push it and you what?” while all the Lindy Hoppers respond “Cross over!”

Dean Collins is credited with bringing Lindy Hop to the West Coast. The Dean Collins style of Lindy is smoother and more refined, taking a lot of the free-flowing upper body movements out of swing dancing. In his version of the Shim Sham, he added more complicated footwork and his signature style. Collins always performed this dance flanked by two men, and it’s reported that he said he would never teach it to a woman as it was a “man’s” dance.

ATOMIC’s very own Shesha Marvin turned his hat into his dance partner, and created this fun and snazzy version of the Shim Sham.  Best of all, grab a hat and follow his tutorial to learn it all on your own.  Here Tips, Taps, and Tops (a.k.a. Jeremy Otth, Shesha Marvin, and Kevin St. Laurent) perform this dynamic and fun routine. Fellas, if you want a Shim Sham that will wow a Swingin’ Betty, this is it.

The best description I’ve read about the Slip Slop Shim Sham comes from Boston’s Wicked Lindy Weekend: “One of the great basic jazz routines made harder” and boy howdy does it ever. It takes the basic dance moves and incorporates a ton of slides.  But when it’s done right, it’s magic.