Slow it down with Slow Drag 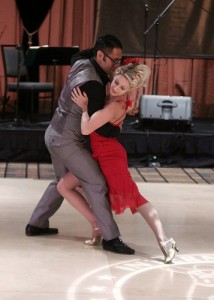 This Saturday dance partners Nikki Marvin and Mikey Pedroza will be teaching an Intermediate Blues and Slow Swing workshop at ATOMIC-Irvine from Noon until 4 p.m.

Mikey and Nikki have developed their version of slow swing that they’ve also called the slow drag.  The slow drag was a precursor to some of the swing dances that we know and love, and it predated the Charleston by at least 20 years.

The first time this American dance appears in history is in the late 1890s in the juke joints and barrel houses of New Orleans.  During these shows faster music would be played early in the evening and as the night went on, the music would get slower and more blues-inspired.  Couples would embrace each other closely, and would shuffle slowly from the left to the right.  The closeness of the couples and the slow, sensual movement of their dancing caused scandal amongst both the black and white communities.  Slow drag and blues dancing were never practiced as a social or performance dance, and it was widely thought that these dances were just public orgies taking place.In the early 1900s, Scott Joplin made the slow drag popular by including it in his 1899 composition “The Ragtime Dance.”  He also included the slow drag in his opera Treemonisha (published somewhere between 1910 and 1911, depending on sources), and it was here that included specific instructions for performing the slow drag:

1. The Slow drag must begin on the first beat of each measure.

4. When prancing, your steps must come on each beat of the measure.

5. When marching, and when sliding, your steps must come on the first and third beat of each measure.

6. Hop and skip on second beat of measure. Double the Schottische step to fit the slow music.

Take a listen to the “Slow Drag” from Treemonisha.  You can still hear the ragtime music influence, but it’s at a much slower pace and you can start to hear the influence of blues creeping in.

There were several other composers who wrote music specifically for the ragtime and slow drag, and jazz musician Jelly Roll Morton helped make this dance, and music, popular.

The slow drag fell out of favor as dances like the Black Bottom and the Charleston became more popular, and along with it the style of jazz and swing music that would define the 1920s, ‘30s, and ‘40s.

The slow drag made a shocking return to popular culture when it was featured in the Broadway musical “Harlem.”  The predominantly white viewers were shocked by the appearance of couples “bumping and grinding” and the black viewers were upset by this exposure of the seemingly seedy part of their culture.

The slow drag then all but disappeared from popular culture as Lindy Hop became the popular dance of the time.  But in the 1950s the slow drag began to re-emerge, and by the early 1960s was making a comeback in the form of “dirty dancing.”

The slow drag can be seen on dance floors today in blues dancing.  While it still hasn’t gained the popularity that the Charleston or Lindy Hop has, it seems to making a bit of a comeback.

If you’re curious, and want to learn how to burn up the dance floor like Nikki and Mikey, come out on Saturday and give it a try. Or, just check out their video here, when they debuted their slow drag routine at 2010’s Camp Hollywood.