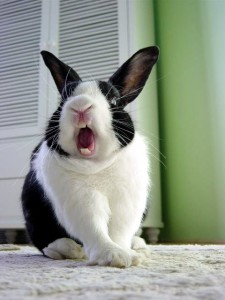 Remember to listen to Tim: "Look, that rabbit's got a vicious streak a mile wide; it's a killer!"

Happy New Year everyone!  Chinese New Year celebrations are in full-swing to usher in the Year of the Rabbit.  Today I wore red for good luck and made sure to have delicious piece of pineapple cake for good fortune in the year ahead.

There is a lot of dancing that happens during Chinese New Year celebrations, and my personal favorite is the Lion Dance.   Unlike the Dragon Dance, which is performed with a troupe of people, the Lion Dance is performed by just two performers.  The competitions have evolved over the years and they now combine a form of dance, martial arts (Wushu) and performance that is truly masterful to watch.  Competitors are also judged on how lively their lion is, which is no small feat when one person is bent over double during almost the entire dance.  The traditional Chinese lions don’t look like a roaming-the savannah African lion, and there’s no real accurate word in English that properly describes them.  They look like a combination of a lion and dog, but are said to possess mythical powers.  Whenever lions are used as guardians at an entrance to a building or garden there are always two together, a male and a female lion.  The male lion is playing with a ball and the female lion has a ball.The Lion Dance comes from an old story that starts with, as good stories should, “Once upon a time.” Once upon a time there was a monk who dreamed that troubles of all kinds were plaguing the land.  The monk prayed for guidance, asking what he could do to prevent these evils from coming to fruition and the gods told him that a lion, the king of all beasts would protect the people and fight back the evils.  No one had ever seen a lion, so the monk took all the magical creatures he could find and combined them to create a lion, and this magical and mystical creature was born.

The Lion Dance shown below is amazing and I am just blown away by what the performers can do.  The dance has a slow build, but make sure you watch at the 5:00 minute mark to see this lion leap.  It’s just magical.