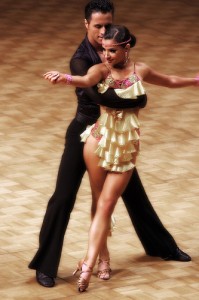 International Latin Style classes have just been added to the ATOMIC Ballroom’s new location in Placentia!

The classes include the Cha Cha, Rumba, Jive, Paso Doble, and Samba and these classes will the proper form and technique that is used in competitions the world over.  American Style dancing is primarily used here in the States on the social dance floor, whereas the International Style of dancing is used more often in competitions.

So if you’re ready to take your Latin dancing to a competitive level, or, if you’re tired of watching Dancing with the Stars and would rather be one, then contact ATOMIC to sign up today!

To get a feel for what the International Latin Style looks like, check out this footage from the 2010 Desert Classic.