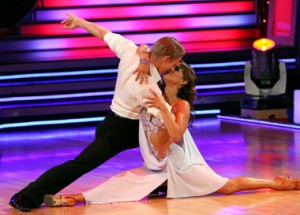 Well, no surprise here – Team Baby Derek once again proved why they deserve to win the Mirror Ball Trophy on DWTS, scoring perfects 10s on both their Paso Doble and their freestyle dances.

I was really hoping that the showdown was going to happen between Team Baby Derek and Brandy and Maks – then it would have been anyone’s guess as to who was going to walk away with the top prize.  But since this season has proved more than any other that it’s more about the popularity than it is about the dancing who knows?  Bristol and Mark, who have scored at the bottom for the last seven weeks, are really here at this stage on popularity alone.  And Kyle and Lacey have been the most underrated dancers this season, but they still don’t have the viewer’s votes (or do they?) to take home the trophy.  Viewers are already threatening to boycott the show forever if she wins and if she does I’ll be amongst their numbers.