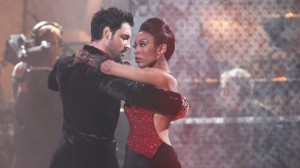 Brandy and Maks have been eliminated from DWTS.

It’s a good thing I’m not a betting woman because this week’s DWTS elimination is nothing short of a shocker.

Despite scoring three 10s for her Argentine Tango, singer Brandy and her partner Maksim Chmerkovskiy, were eliminated last night and Team Baby Derek, Team Schmurgles, and Team Ballin’ are going to the finals.

Once again it came down to the popular vote as Brandy and Maks have performed near-perfect routines week in and week out.  But I am just floored that this couple, who kept Jennifer Grey and Derek Hough fighting to hold onto first place, have been eliminated.  I was looking forward to a finals series that was going to be competitive and leave me wondering just who was going to make it but now it seems like a sure thing.  While Kyle Massey and Lacey Schwimmer have slowly danced their way into America’s hearts I’m not sure that they’re popular enough to take the Mirror Ball Trophy.

You can watch all the dancing action online here – and we’ll see what happens next week on Dancing with the Stars.