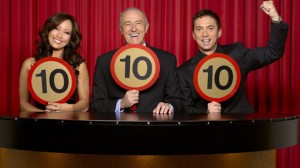 Its official: the semi finals are here on DWTS and this week the dancers brought their A game to the dance floor.

With only four remaining couples every mistake counts, and last night Jennifer Grey and Derek Hough finally made the comeback I’ve been waiting for.  They scored three 10s for their sexy cha-cha and three 10s for their waltz, putting them at the top of the heap.  I’m glad to see that after being plagued by injuries Team Baby Derek is still a contender.

Hot on their heels are Brandy and Maks, who steamed up the floor with a Paso Doble, even though I do agree with Carrie Ann’s assessment Brandy was just a little too aggressive, but their Argentine Tango scored at the top to place them in third.  I have to say, I expected them to place second after scoring in the top the last few weeks, but it just goes to show you that it’s anyone’s dance at this point.

I was thrilled to see that Kyle Massey and Lacey Schwimmer scored second place this week.  They’ve been dancing well all season, with each performance getting better and better.  I’m hoping that America voted and that they’ll make it to the next round.  They have so much fun when they dance, and Kyle started off the samba with a moonwalk – loved it!

In fourth is Bristol Palin and Mark Ballas and I think this is the season’s wild card.  Bristol has made grade strides as a dancer and last night she performed a beautiful Paso Doble.  It’s anyone’s dance at this point and I’m curious to see who is going to be voted off tonight.

Tonight it’s the results and we’ll see who will continue to next week and who’ll be heading home.  Last night’s scores were as follows:

In the meantime, if you don’t feel like watching the whole episode here online, take a few minutes and see why Baby is back!