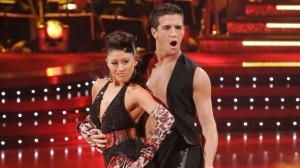 Last night DWTS celebrated their 200th episode (has it really been that long?) and divided the remaining six couples into teams to recreate dances from past seasons.  And if you haven’t watched a single episode this season this is the episode to watch.

Both teams danced the cha-cha in homage to past winners Kristi Yamaguchi and Apollo Anton Ohno’s spectacular renditions of the dance.  Both teams brought their A-game and they looked far and away better than they did last week.

The individual dances were equally spot-on and this week’s leaders are no surprise.  Brandy and Maks’ foxtrot was absolutely smokin’.  And, to everyone’s relief, Jennifer Grey and Derek Hough recovered splendidly from last week’s mishap with a killer tango.  But it’s anyone’s game.  Everyone danced their best last night and for the first time I can’t really say who should be voted off.  Bristol has shown real improvement as a dancer and Kyle and Lacey may have been the only couple who rocked the Paso Doble. 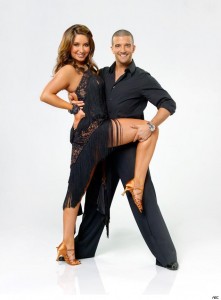 Bristol proved that she's a contender for the Mirror Ball Trophy.

Watch tonight’s results show to see who keeps dancing…and who will leave the dance floor for good.