Steve Lucky and the Rhumba Bums 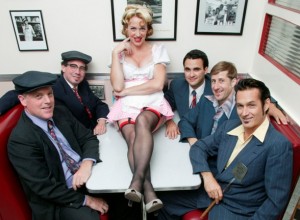 Steve Lucky and the Rhumba Bums

On not being one of “the cool kids”: Steve Lucky’s musical career started with piano lessons.  “At the time, playing the piano just wasn’t popular,” he said, reminiscing.  “I always loved rockabilly, and the music of the ’30s and ’40s but I was classically trained.”  He taught himself to improvise and play the jazz music that he loved.

Steve’s college days: Steve studied ethnomusicology – “But it was really just an excuse to study and play music.”

Life before California: Before moving to San Francisco in the mid-’90s, Steve and Carmen were making the rounds with a six-piece band in New York City.

On Some Like it Hot!: Steve and Carmen had a lot of fun writing and recording their new album, Some Like It Hot, with the predominant themes being food and makin’ whoopee.  “I grew up in a family where the men were always in the kitchen,” said Carmen. 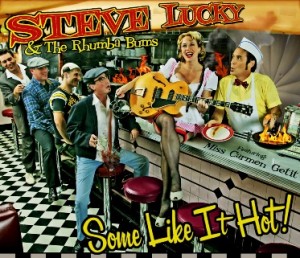 “Every family photo has one of my uncles standing next to the stove, stirring a big pot of somethin’ good.  So this album was all about what women really find attractive: a man who can cook.”  These themes inspired songs like “Some Like it Hot” and “Where’s My Gravy?” (from their first recording Come Out Swingin’!).

One thing Steve Lucky wants you to know: “If you really love the music, listen to the originals, get familiar with all the swing music that’s out there, and be richer because of it,” he said.  “At the same time, support the musicians that give this rich history to the public and help keep it alive.”

Steve Lucky and the Rhumba Bums are on tour for the rest of the summer and will be coming back to ATOMIC, so if you didn’t catch them this time around, check out their calendar for the rest of their tour dates and get out there and support these great musicians.