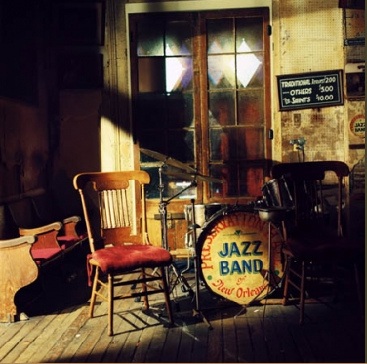 As a swing dancer and musician I’m naturally a big fan of all things big band and jazz-related.  I just downloaded a copy of “An Album To Benefit Preservation Hall & The Preservation Hall Music Outreach Program” (Deluxe Version) off of Amazon and let me tell you – it was great.

The album has a distinctive Southern feel to it and includes several traditional spirituals; some redone with a very 1920’s feel.  As a dancer I love the fact that there are multiple dance styles that can be applied to most of the songs, from Lindy Hop to Foxtrot to Ballroom to Charleston, and even a little Balboa.  I literally haven’t stopped playing the album since I downloaded it — its truly one of my favorite examples of New Orleans-style jazz.

My favorite song on the album is Yim Yames’ version of “Lousiana Fairytale.”  It’s a wonderful update on a good ol’ classic and always makes me want to get up and dance.

The Preservation Hall Jazz Band is a classic jazz band based out of the French Quarter in New Orleans.  It was founded by Allan and Sandra Jaffe in 1961. The bad is dedicated to preserving the art form of New Orleans Jazz and the historical Preservation Hall building that has been home to the band since its beginnings.  Their music embodies a joyful, timeless spirit and have performed at such prestigious venues as Carnegie Hall and the Lincoln Center as well as for British Royalty and the King of Thailand.