NEW Midnight Milonga at ATOMIC – What is a Milonga? 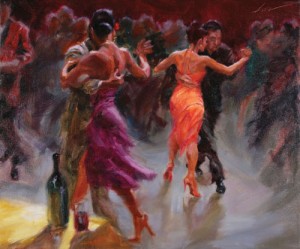 ATOMIC Ballroom is going Tango! Beginning April 24, 2010 Saturday late nights at ATOMIC will be taken over by the Midnight Milonga.  Starting at 11:15pm the Midnight Milonga, hosted by the ATOMIC Ballroom and the OC Tango Dance Club, kicks off with a Beginner Argentine Tango class.  When the clock strikes midnight DJ Matthew Castillo will take over, spinning the best tango tunes to heat up the night.  The dance is free with the $15 lesson, or $5 just for the dance.

Milongas are gatherings held specifically for tango dances.  Traditionally milongas are held once a week and start later in night than traditional dances and continue into the wee small hours of the morning.  A lesson is typically held before the milonga starts so that beginners and advanced students alike can learn some steps and get to know each other.

There are a few general etiquette rules that can make your first milonga experience a great one.  Milongas are more formal than other types of social dancing, so dress up a bit and make sure that you’ve showered, shaved and are otherwise personally groomed (this goes for ladies as well as the guys).  Typically when you dance with someone at a milonga, you will dance with that person throughout the entire tanda, which is a three or four song set of similar types of music.  In between tandas the DJ will play a cortina, which is a non-tango song of about 30-45 seconds long that will allow you to change partners.  As always, be courteous and respectful and you’ll have a wonderful time!

Milongas have a rich history in the Argentine community and throughout the world.  Originating in Buenos Aires, Argentina, the golden age of tango was during the 1930s and 1940s when tango got a boost in popularity in Paris.  The tango was danced everywhere from brothels to neighborhood courtyards to restaurants and clubs.

Milongas are also a musical genre and milonga songs are played along with the traditional tangos and vals (the tango version of the waltz).  The milonga genre of music predated the tango and was very popular in the 1870s.  Milonga music has its origins in the European music that immigrated with the colonists who made Argentina their homes, and it’s peppy, upbeat tune can still be heard during milongas all over the world.

Even if you haven’t danced tango before come out to the Midnight Milonga and give tango a whirl!  It’s going to be a night to remember.