Cyd Charisse: Dancing in the Dark 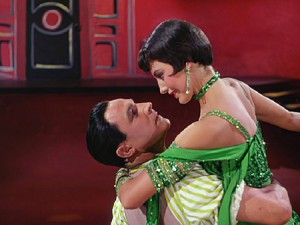 Cyd Charisse and Gene Kelly in Singin' in the Rain.

Cyd Charisse had one of the most spectacular dancing careers, and is known primarily for her dancing in Singin’ in the Rain and The Band Wagon. And of course, she’s also remembered for having the best pair of legs – ever.  MGM thought so too, as her legs were insured for a reported $5 million dollars.  I think us gals would commit felonies for gams like those.

Born Tula Ellice Finklea (March 8, 1922 – June 17, 2008) in Amarillo, Texas, Cyd was introduced to ballet when she was six to combat the effects of polio and to strengthen her legs. The name “Cyd” came from one of her sibling’s inability to say “sis”, and was later changed from “Sid” to “Cyd” by MGM to make her sound more alluring.

At 12 she began training in Los Angeles with Bronislava Nijinska and Adolf Bolm and by age 14 she auditioned for and was accepted by the Ballet Russe de Monte Carlo.  She toured and danced with the company, and married fellow dancer Nico Charisse on the Parisian leg of their European tour in 1939 (they would divorce in 1947 and had one son, Nicky. Her subsequent marriage to Tony Martin in 1948 lasted sixty years).

The outbreak of World War II caused the company to disband, and Cyd returned to the Los Angeles.  She was spotted by Russian dancer David Lichine and her talents won her a dance role in the film Something to Shout About.  Her work 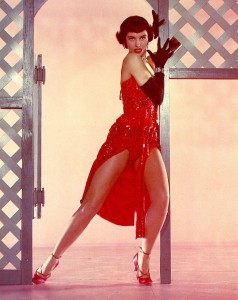 in this film attracted the attention of famed choreographer Robert Alton, the same man who spotted Gene Kelly, and soon she had a role as MGM’s resident ballet dancer.

Although she had already risen to acclaim as a ballet dancer she will be forever known as the lucky gal who got to dance with two iconic dancers – Fred Astaire in “The Band Wagon” and with Gene Kelley in “Singin’ In the Rain”.  I could talk about her pairings, but you can see that no matter who she was partnered with, as a dancer she shines.

Cyd was a natural follow and she had the remarkable ability to adapt her own dance style to that of her dance partner so that they moved as one.  Of course she was asked to weigh in on the debate as to which dancer was better – Fred or Gene.  Responding with her usual amount of class, she said that “…it’s like comparing apples and oranges.  They’re both delicious.”  She highlighted Gene’s physical strength and ability to choreograph for any dancer as his strong points, whereas Fred knew how to choreograph a spectacular number for himself and his partner but had an uncanny sense of rhythm.  But watching both of these dance numbers it’s impossible to take your eyes off of Cyd and her graceful and lyrical movements.

Cyd retired from dancing in the 1950s, but continued to act and perform.  In 1992 she made her debut on Broadway, playing the aging ballerina, Elizaveta Grushinskaya, in the musical version of Grand Hotel.  Although she no longer worked as a dancer, Cyd Charisse continued to dance her way through life until her death at age 86 – still the epitome of Hollywood’s Golden Era and looking just as lovely as she did when she was a rising star.